‘Liberty for wolves is death to the lambs.’

People often speak in similes and metaphors. We find comfort in symbolism and allegories, creating a sense of spatial separation in our minds from that which we desire and those that haunt us. Business men refer to themselves as lions when they wish to appear dominant or king-like; school children degrade one another by calling their peers a chicken, a dog, or a pussy. And a person of low morals can often be labelled as a rat or a snake.

Even free thinkers are not exempt from this kind of hackneyed pigeonholing of their peers; labelling those that they consider to be mindless drones suckling on the bosom of society as lambs or sheep.

It’s no coincidence that we choose animals to explain or understand our behaviours either. After all, we are merely another creature that rose from the primordial depths and evolved into the beings we are today. Though we may try to deny it, we are primitive creatures trying valiantly to adapt to a world that is developing at an ever-increasing rate before our very eyes.

In today’s modern society, with its abundance of threats (both perceived and legitimate), relating how we feel about ourselves, or how we perceive others to animals recognised as being courageous, dastardly, or cowardly, allows our brains to easily establish opinions about who to fear, and who to trust.

This act of association allows us to pursue other ventures such as art, education, business, and romance. While this may can seem like an intelligent concept; free your mind of primitive tasks to focus on modern obsessions, it is in fact fraught with risk. Why you ask? Because that thing you call an imagination; that beautiful part of the brain that allows us to dream, also causes us to fear.

Hmm. Now that there’s a little perspective around what I’m about to say next; it’s time to hit them with the sucker punch. Let me shake out my hands for a second and stretch out my wrists. Here it comes…

You’re not a lion. You’re not a dog, or a rat, a pussy, or a fucking snake. But you are a lamb. And you are surrounded by sheep. Whether you want to admit it or not, you are afraid to be the best version of you that you could possibly be. Why? Because you have been conditioned to see the weakness where there is strength, and convinced that the art of survival lies in finding safety in numbers. The great shepherds of society have created an illusion of fear that keeps you suppressed and afraid to be an individual, rather than one of many.

It’s not difficult to do this either. It’s been happening since the birth of mankind. Society is defined as an aggregate of people who function in an orderly community. What better example is there of societal order than a shepherd controlling a flock? What greater illustration of mental suppression and conditioning than a small few influencing the actions of the many? Moving them through a mundane existence and uniformity before they are finally led to the slaughter.

Controversial? Maybe. Reality? You better believe it. But we’re not quite done yet.

Here’s the kicker: You are the shepherd of those around you; just as much as they are the shepherds that keep your own thoughts, feelings and actions in check. Our desire to be socially accepted and valued means that we are consistently watching over one another to ensure that we are subduing those that threaten to move incongruously to the flock, whilst simultaneously striving to do so ourselves. 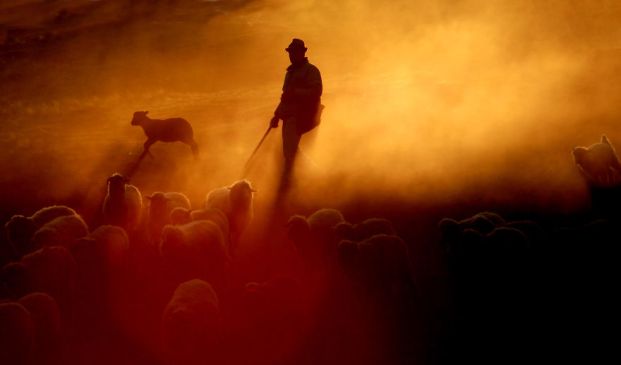 We look at those who are strong and independent as threats: wolves at the door that should be feared. And we look at those beneath us as lambs who long to be led. Lambs and sheep are instinctively fearful creatures who thrive off of social awareness. They are placated when they can see the rest of their flock and are afraid when they are forced to stand alone. When we view one another in such a way, anxiety plucks at our heartstrings and inhibits us from being all that we can be. We condition ourselves to feel discontented if we lose sight of our peers, so we shepherd and we suppress.

Inversely, a wolf is a highly intelligent, fiercely loyal beast with a desire for freedom and faith in its own instincts. They roam in packs, but are comfortable in their ability to hunt alone. These are characteristics that any collective of individuals should aspire to, not quash. And yet our imaginations; the very thing that affords us the opportunity to think, feel and act, convinces us to fear a strength that we fail to acknowledge is within all of us.

Imagine if you will, a society where individuals didn’t feel the need to play shepherd over their peers. Where instead of devoting attention to watching over one another in fear of the successes of friends and strangers, we instead focused on developing and inspiring the characteristics of loyalty, intelligence, and the desire to be free within ourselves. Imagine the emancipation from an anxiety-fuelled societal philosophy as we celebrate the successes and positive attributes of others, rather than focusing on reigning them in so that we can feel a sense of control and security as we watch over our flock.

For some readers this idea is going to sound like a bunch of contrived bullshit. They’ll screw up their nose and say that a society of wolves is dangerous. They’ll argue that we equate the wolf with fear for a reason, and that we are better off as lambs and sheep. But they are wrong. They really, really, are.

I opened this post with the quote liberty for wolves is death to the lambs, and I pray with all my heart that the mindset of lambs does die within our society. It needs to. There are so many brilliantly talented people living out their lives denying themselves of the opportunity to be great because they are fearful of standing out from the flock. We have created a bizarre culture where fitting in is more important than embracing oneself.

And yet, just as sheep and lambs move in flocks, so to do wolves move in packs. The difference between the two is that the latter move according to their own whim, not at the direction of others. They move with a pride and a purpose that the lambs of the world will never understand.

Our minds are faculties of consciousness and thought that enable us to experience the world around us. But the imagination can play tricks on us. It can convince us that we are small when we are powerful beyond all measure. And it can allow us to believe that we wish to be lambs, when we would be so much stronger as a pack of wolves. Intelligence, loyalty, and a desire to be free are traits to be revered, not abhorred.

Chris Nicholas is an author from Brisbane, Australia. He has published two novels, and is currently working on his third. View all posts by Chris Nicholas

38 thoughts on “The Liberation of Lambs”

Follow The Renegade Press on WordPress.com
Join 24,872 other subscribers

Follow The Renegade Press on WordPress.com
Join 24,872 other subscribers