It goes without saying that the world is in really bad way right now. As I write this, nations all around the globe are struggling to contain a global pandemic that has already claimed over 100,000 lives, infected more than 1.6 million people, and left millions more financially devastated. In addition to this, entire countries are locked down as shelter in place restrictions attempt to slow the spread of a virus that is overwhelming healthcare systems and has already significantly altered the course of human history.

Covid-19 is everywhere. It’s on our televisions and radios; in our newspapers and magazines. It’s on the tips of our tongues when we talk to our friends and family, and in the back of our minds with just about every decision we make.

Right now the world appears to be stuck in this morbid state of doom and gloom. We’re afraid. And we should be. We’re living through a fucking scary time with no clear ending in sight. We don’t know how long shelter in place restrictions will be needed, if our jobs are safe, or even when we’ll be able to see our loved ones again. But we do know that while each of us is trying their best to get through this pandemic, we’re collectively at risk of being overcome by the gravity of our situation if all we do is consume negativity.

So rather than talk directly about how Covid-19 has reshaped our lives, I want to talk about the relationship between the pandemic we’re living through and a long-misconstrued societal belief whose etymology is derived from wolves instead.

About a year ago, I was visiting my Mum interstate. As we often do when I go home to see her, we were sitting around her kitchen drinking coffee and talking; catching up about all the little things that never seem to come up in conversation when we’re on the phone. I have no idea why, but for some reason our conversation on this particular day turned to the subject of masculinity; and in true Chris Nicholas fashion, my over confidence was on full display. As someone in his thirties who has experienced death, battles with mental health and masochistic behaviour, financial ruin, failed relationships, and family illness, I considered myself to be a man. I have taken a few big hits in life, and although I’ve been knocked down more times than I can count, I have always found a way to stand back up and face whatever life threw at me next.

But as Mum and I waxed philosophical about what it meant to be a man, she told me that she never really considered me to be a stereotypical alpha-male. The comment was supposed to be a compliment; and part of me took it that way. As a society, we often perceive an alpha character as a dominant individual with greater access to power, money, and respect. These people are often abrasive, intimidating, and sit at the top of a social status hierarchy.

When compared to these criteria, I wasn’t, am still am not an alpha-male. I like to keep fit, but am by no means the most powerful person I know. I’m prepared to fight for what I believe in, but I’ll never initiate conflict or be perceived as intimidating. And I have a couple of bucks in my back pocket, but I’m not exactly rolling around in piles of cash making frivolous investments without a care in the world. And yet, despite not meeting any of the criteria that society needed to consider me an alpha, Mum’s well-intentioned comment rankled me. Because if I wasn’t an alpha, then what was I?

So, I started researching what it truly meant to be an alpha.

The term alpha as society now knows it was first coined in during the 1940s by Rudolph Schenkel of the University of Basel in Switzerland as he studied a pack of grey wolves held captive in a zoo. During his study Schenkel observed as the wolves competed for status within their own sex, until over time, the pack established a clearly defined alpha pair, documenting his findings and sharing them with the world. Then almost thirty years later, the American scientist L. David Mech penned a book called The Wolf which built upon Schenkel’s findings and helped to popularise the concept of alpha and beta wolves within the pack.

Throughout their respective papers, both researchers noted pack dynamics that used competition to define rank. The duo used the phrase alpha to identify the wolves who used domineering, violence, and aggression to become the clear leader of a pack. The savage imagery that these papers presented was hugely appealing to popular culture, particularly in mediums such as film where an alpha could be defined as a win at all cost protagonist who would burn down an entire village just to serve his own selfish ends.

And so, thanks in part to these two studies (and a myriad of similar research papers), society began to use term alpha wolf as a term of endearment to define those members of our society that climbed the social, financial, or political hierarchy at any cost.  Thanks to stylised film and television, it became cool to be seen as a badass who didn’t give a shit, and who used animalistic dominance to achieve their goals. Because these characteristics were typically given to male roles within movies, the phrase was adapted, and the alpha wolf became the alpha male. He was the asshole you hated for his ruthlessness, but admired for his success. 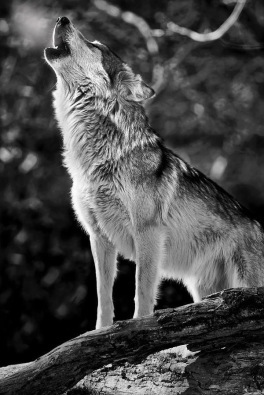 But it turns out that the studies used to define the hierarchy of man were flawed. The wolves in the two researcher’s studies weren’t in their natural environment while under observation. They were captives forced to coexist in a foreign climate that stunted their natural instinct. And so, operating in a high-stress situation, they turned on each other and used violence to determine their pack structure.

In the late 20th and early 21st century, researchers began to question the findings of Schenkel and Mech, tracking grey wolves in the wild to test their hypotheses. Until this point scientists had believed that independent and unrelated grey wolves formed packs each winter out of necessity. They thought that wolves lived in close proximity, and banded together during winter to increase their chances of survival, using dominance and violence to establish their pack’s structure.

But through this process of tracking the movements of packs, researchers learned that a pack isn’t a group of individuals drawn together by circumstance, it is a nuclear family of wolves that consists of two parents, and their children. The alpha of a pack is not the most violent, or aggressive. The alpha is simply a paternal figure who co-parents his offspring with his mate.

In his natural habitat, the alpha, like so many great father figures in our own species, treats his family with love, generosity and kindness. He’s notorious for playful roughhousing with his pups, and is even known to pay special attention to the upbringing of the runt of a litter. That doesn’t mean that the alpha is all warm and fuzzy though; wolves are still incredibly dangerous apex predators. And the alpha will ferociously protect his pack against a threat when he needs to. But, as renowned wolf researcher Richard McIntyre says:

The main characteristic of an alpha male wolf is a quiet confidence; quiet self-assurance. You know what you need to do; you know what’s best for your pack. You lead by example. You’re very comfortable with that.

Which means that not only did researchers like Schenkel and Mech get it wrong when they assumed that being an alpha meant being domineering (a viewpoint that Mech later  recanted). But it also means that society has it wrong when we assume an alpha to be intimidating or powerful; or even that their purpose in life is to serve themselves. Those are the characteristics of an asshole. An alpha is calm, level headed, knows what is best for their pack, and isn’t afraid to put the need of others above their own. They show sensitivity and love to those they care for, and are willing to do violence only when necessary.

Perhaps if my mum were to compare me against these criteria, rather than the misguided version of an alpha popular culture has led us to believe in, her opinion about whether I am a stereotypical alpha-male might have been different.

And you’d be right for doing so. The truth is, the concept of being an alpha has as much to do with Covid-19 as you allow it to.

As I said at the top of this post, the world is a very scary place right now. We’re surrounded by a perpetual feeling of doom and gloom. We’re worried about our families, our livelihood, and our future. But through all this uncertainty, we as individuals have been afforded with the opportunity to do something great. And that greatness is to be calm, to lead by example, and to be who your loved ones need you to be during a difficult time.

The last thing this world needs right now is the version of an alpha that society has been misled to believe is true. We already have an overabundance of assholes who put their needs before everyone else’s even without the added stresses of a global pandemic. Instead, the world needs more true alphas; leaders within family and friendship units who recognise that we’re living in uncertain times, who understand what their pack needs, and who have the self-assuredness and confidence to support and nurture the people they care about.

Whether that support is making your partner a cup of tea, turning off the television to play with your kids, or just phoning to check in on your friend or relative who may be struggling, every little moment of kindness matters in a time like this.

Years from now future generations are going to learn about the Covid-19 pandemic in schools. They’re going to learn about the lives lost, countries locked down, and the stories of human compassion that kept us all together. When that time comes, imagine how rewarding it would be to tell them that during one of the defining moments of our generation, you had what it took to be a true alpha, and that you made a difference in the lives of those you cared about. That rather than being a domineering asshole who thought the world revolved around you, you showed kindness and generosity even when others around you may not have. That you kept people safe, made sure that they were loved, and played your small part in a global effort to overcome adversity.

I know that it may not seem like it right now, but eventually this pandemic will pass, and our lives will return to some semblance of normality. It’s just going to take some time. Until then, stay home, stay safe, support your loved ones, and be a wolf.